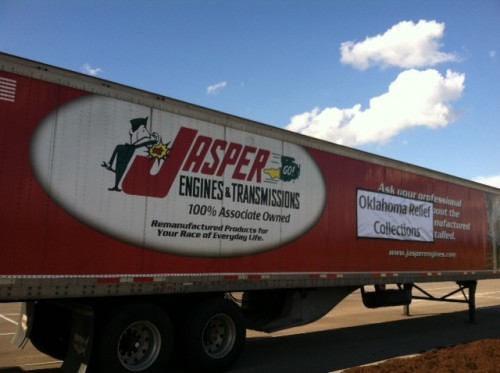 We are proud to be a part of a company that is first to respond.  Jasper Engines & Transmissions has this trailer scheduled to depart Saturday afternoon to deliver items directly to the People impacted by the tornado in Oklahoma.

With JASPER reman components, you get tolerances that meet or exceed those of the OEM (original equipment manufacturer) and a nationwide warranty that, in many cases, is better than a new component warranty. Completely remanufactured... for a lot less than you might think.  But, whatever term you use for that component you're having installed in your car, truck, SUV or boat, you should make sure that you're getting exactly what you think you're getting. Here's how we differentiate used, rebuilt and remanufactured:

"I decided the automobile business was going to be big and that I should like to be a part of it."
â€” Alvin C. Ruxer

Alvin C. Ruxer, was born in the Southern Indiana town of St. Meinrad. Although he is best known for his involvement in and contributions to the automotive industry, there were several sides to this man. As a newspaper article once stated, Alvin Ruxer floorboarded life's accelerator. His love of baseball was born at an early age. Although he chose business over an opportunity to play semi-pro ball, Alvin's interest in the sport never waned. In fact, he used many of the sport's basic principles in his personal and business dealings.

Alvin often jokingly said he saw opportunity in everything. As a young businessman, Alvin was once quoted as saying, I didn't have enough money to afford a bookkeeper so I married one! Hilda Ruxer was a real partner both in his business and personal life.

In addition to founding JASPER Engine & Transmission Exchange and Ruxer Ford, Alvin built an American Saddlebred horse farm that is known throughout the nation.