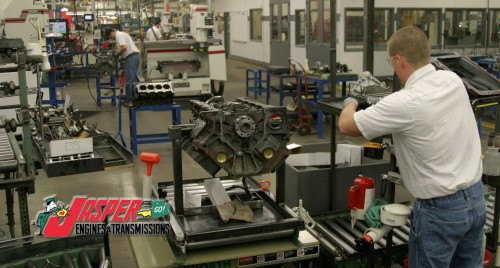 The Jasper Engine & Transmission facility utilized four remanufacturing lines (called PODs) in which an engine went from a core, to a finished product, within one remanufacturing unit. Each POD has specific engine families that it remanufactures. This allows each POD to become specialized with those engine families, which helps JASPER produce a quality product and produce it more efficiently.

The need for a fifth POD was realized as early as November, 2013, as increased sales of JASPER remanufactured Ford modular engines (4.6L and 5.4L Triton V8 and 6.8L V10) exceeded the Gas Engine Division’s maximum production.

“We were selling 28 units per day at the start of the year,” said Randy Bauer, Jasper Facility Gas Division Manager. “We’re currently averaging 33 sales per day of these units.”

“We were spending a considerable amount of overtime to produce these units,” Bauer said. “With this engine family remanufactured in a separate POD, we’ll reduce the amount of overtime that our Associates are working, and at the same time improve the ergonomic part of their work.”

The new POD, named POD 305, began gas engine remanufacturing on June 1st development, and the relocation of JASPER’s Differential Division. A team of Associates handles engine remanufacturing duties within five areas: disassembly, prep and repair, head machining, block machining and assembly/testing.   This POD expands on an open concept method used in other areas within the Gas Division. “We had open floor space available to configure each department in a U-shaped design,” said Bauer. “We found this design to be very successful in the disassembly and assembly areas in our other PODS, so it was used in each area of 305, said Bauer.”

“The U-shaped design gives Associates more room to work, and it’s more visible and manageable for Team Leaders to check in on progress,” he said. “This is in contrast with areas in our existing PODS that utilize a linear form of remanufacturing, where work space is at a premium.”

The open concept of POD 305 also allows customers to see what happens while they are on tour.  “The linear fashion of the old-style PODs is very cramped, and it’s hard to get tours to view the processes.” Bauer said. “With POD 305, customers will be able to see from the aisle way, looking into the area, and get a much better view of the quality of our product.”

With the formation of the JASPER Engine Power Drive Transmission facility later this year, the Gas Division is anticipating additional floor space within the Jasper Facility to transform their existing PODs in a similar fashion.

For more information on the complete line of remanufactured gas engines from Jasper Engines & Transmissions, please give our shop a call.  We would